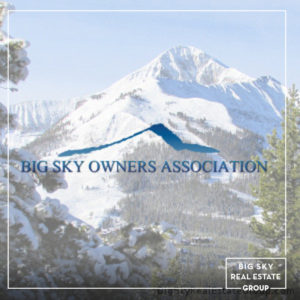 The Big Sky Owners Association is Big Sky’s largest and oldest homeowner’s association. With over 2,300 properties encompassing over 8,000 acres the Association spans across both Gallatin and Madison Counties. The Big Sky Owners Association (BSOA) is governed by an elected board of nine volunteers and supported by staff. Annual membership assessments are used to provide public serv﻿ices and community support, including winter road maintenance, street lights, speed control, road signs, weed and pest control, open space maintenance, architectural review and landscape design and management of compliance issues within the BSOA jurisdiction as they pertain to the governing documents.

The Big Sky Owners Association is a non-profit 501(c)(4) corporation registered with the State of Montana and managed by an elected Board of Directors. Membership is both automatic and mandatory. The BSOA’s primary function is to maintain common areas and govern the homeowner community in accordance with the provisions of applicable legal documents including Covenants, BSOA Bylaws, Articles of Incorporation, and Architectural Review Design Regulations. The association is financially supported by assessments collected from Members of the Association. Membership is both automatic and mandatory. A database of current ownership is maintained and updated through notification by new owners, title companies, and annual visits to both the Gallatin and Madison Counties Clerk and Recorders office (by Staff) to collect up-to-date warranty deeds.

The Big Sky Owners Association was created when the covenants of the three original Big Sky subdivisions were recorded in 1971, the BSOA has assumed many roles in its 45 year history reflecting the growth and development of the community. The BSOA was formed “to manage, operate and maintain that area that is more specifically described as the Big Sky of Montana, Inc. Resort.” The inaugural 1973 Board of Directors was headed by ski jumping champion and the first Big Sky Resort president, Gus Raaum. Raaum was responsible for hiring J. David Penwell as the Resort’s attorney. Penwell acted as incorporator in the creation of the Association that would act as a supporting organization for the Resort.

Because the area could not incorporate, the BSOA, being the only existing HOA, assumed the mantle of municipality. Gus Raaum and the BSOA Board declared the purpose of the BSOA as “the quasi-municipal body established to provide common area service throughout the entire community.” The BSOA once was the community post office, established the BSAC, created the Big Sky Community Corporation, and helped build the Community Park to name a few of its many accomplishments. As Big Sky grew, the BSOA’s municipal and resort support functions decreased. Today the Big Sky Owners Association serves to preserve, protect and enhance property values.

​Before the area known as Big Sky was established, US Highway 191 leading to Big Sky was an Indian and wildlife thoroughfare: a rough route following steep grades and requiring several fords of the Gallatin River. In 1883, Gallatin County Commissioners hired a survey group to determine whether a road from Salesville (now Gallatin Gateway) to Yellowstone National Park, which had been established a decade earlier, would be feasible. A road from the Gallatin Valley to Taylor Fork was finally completed in August of 1898, and the rest, as they say, is history.

2012 Construction of the Northwestern Energy Jack Rabbit-Big Sky power line upgrade through the Gallatin Canyon begins. The first phase of the Big Sky Skate Park is completed at the Big Sky Community Park. The Rotary Club of Big Sky funds the addition of a climbing boulder to the Community Park.

2008 BSOA Bylaws are updated and recorded. In a majority vote of the BSOA membership, the Sweetgrass Hills and Meadow Village covenants are revised and restated. The Governing Documents Project effort also results in the rescinding of several old and obsolete resolutions and policies. New policies adopted include Conflict of Interest and Document Storage.

2007 The Big Sky Community Corporation is formed as an entity completely independent of the BSOA. New Articles of Incorporation and Bylaws are filed with the Montana Secretary of State and an independent Board of Directors is nominated.

2006 Big Sky Community Corporation closes on the park option and river bottom lands making BSCC the new owner of a 44 acre park located in the heart of Meadow Village. Construction begins on the bridge portion of the Spur Road connector trail. Membership hits 2300 in the BSOA with more than 189 projects being reviewed by the architectural committee in the last 3 years.

1976 Chair Gus Raaum and Board declare the purpose of BSOA is to serve as “the quasi-municipal body established to provide common area service throughout the entire community”. An injunction against paving spur road from Highway 191 to the mountain village is lifted, and the board is successful in getting a power line to Big Sky.

1975 Increased board to 7 members. Paved roads in meadow village.