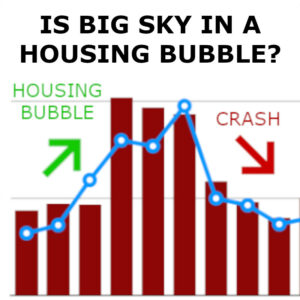 Is Big Sky In A Housing Bubble

We are frequently asked if Big Sky is in a Housing Bubble and it is a common concern among buyers. Looking at the Median Price, and Price Per Square Foot charts in the Real Estate Market Reports in our Data Center it is easy to come to the conclusion that Big Sky is in a housing bubble because those charts indicate a steady increase in prices.

This is a topic where many people have strong opinions. We would like to present you with some data, and have you draw your own conclusion.

What Is A Housing Bubble

A housing bubble is a run-up in housing prices fueled by demand, speculation and exuberance. Housing bubbles usually start with an increase in demand, in the face of limited supply, which takes a relatively extended period to replenish and increase. Speculators enter the market, further driving up demand. At some point, demand decreases or stagnates at the same time supply increases, resulting in a sharp drop in prices, and the bubble bursts.

The financial crisis of 2007–2008 was related to the bursting of a real estate bubble in the United State. This decline in real estate prices is still on the mind of many real estate buyers when they look at the recent price increases of houses and condos in many markets like Big Sky.

The wide spread decline of real estate prices in 2007–2008, and the run up in prices prior to the “bubble bursting” was caused by mortgage-backed securities created by hedge funds and banks. This was known as the Subprime Mortgage Crisis. The insurance companies covered them with credit default swaps. Demand for mortgages led to an asset bubble in housing because lenders gave mortgages to a large number of buyers that should not have qualified for those loans. 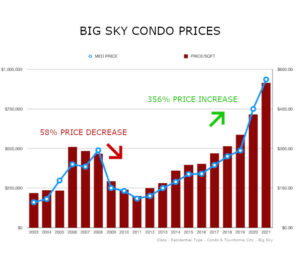 During the period from 2007 to 2011 many real estate markets in the United States had price declines, but some markets like Bozeman held up much better with prices declining less than half as much as Big Sky.

Is Big Sky In Another Housing Bubble?

Many areas of the United States appear to be experiencing a housing bubble, or at least are experiencing Year Over Year declines in Median Sale Prices. Since 2013 prices for real estate in Big Sky and the surrounding areas have steadily gone up. However, this has been driven by good fundamentals of buyer demand combined with an ongoing lack of inventory and inflationary pressure. Mortgage companies are much more conservative on who they lend money to now. Median Sales Prices and Price Per Square Foot Prices in Big Sky are not currently declining and inventory levels remain at record lows. Looking at Big Sky Condominiums Months Supply For Sale charts in our Big Sky Real Estate Market Reports you will see that inventory levels for Big Sky remain at record lows, and inventory levels for Big Sky Condominiums remain near record lows.

Just like the stock market, the Big Sky Real Estate Market is complicated, and highly dynamic. Some areas of the market may be experiencing weakness, while other areas continue to be strong. We encourage you to contact our agents to better understand what is happening in the specific Big Sky Neighborhoods and price points you are looking in.

Our Big Sky Real Estate Experts look at 4 Key Market Indicators to determine if Big Sky is in a housing bubble.

These “risk indicators” are ratios, and we look at how much the ratio has risen or fallen. Some areas of the United States have changes in these ratios that are a concern, but the national market is still healthy when compared to other countries like Canada, New Zealand, Sweden, and Norway.

Big Sky is an expensive town to live in, but the fundamental Key Market Indicators still look healthy. From 2011 to 2021 rent prices for a 2 bedroom home or apartment in Big Sky have more than doubled. During that same period the Median Sale Price of condominium in Big Sky has gone up 80%.

House Price-Income Ratio is a concern for cost of living and affordability metrics, but a significant percentage of Big Sky’s population are wealthy. Big Sky needs more affordable housing options nad the key metrics in this area are a concern.

In 2008, at the start of the recession and Subprime Mortgage Crisis, inflation was running close to 5% – but this was primarily due to cost-push inflation from higher oil prices. During 2012, there was a double dip-recession with low economic growth, but rising inflation. Inflation rates have historically risen during an economic recovery. Core inflation rates in recent years have bounced between 2% and 3%. Inflation rates in 2021 and 2022 are a concern. The United States has not had a year with negative inflation since 1954.

To calculate the change in Real House Prices you need to factor in the rate of inflation and subtract that from the average yearly price increase for the real estate class you are analyzing.

The Federal Government’s dramatic expansion of the supply of money has contributed to inflation, and the rising cost of real estate because the dollar has been debased. M2 Money Stock is a calculation of the money supply that includes all elements of M1 Money Stock as well as “near money.” M1 includes cash and checking deposits, while near money refers to savings deposits, money market securities, mutual funds, and other time deposits. M2 assets are less liquid than M1 and not as suitable as exchange mediums, but they can be quickly converted into cash or checking deposits. By dramatically increasing the supply of money, the government has lowered the value of the dollar. 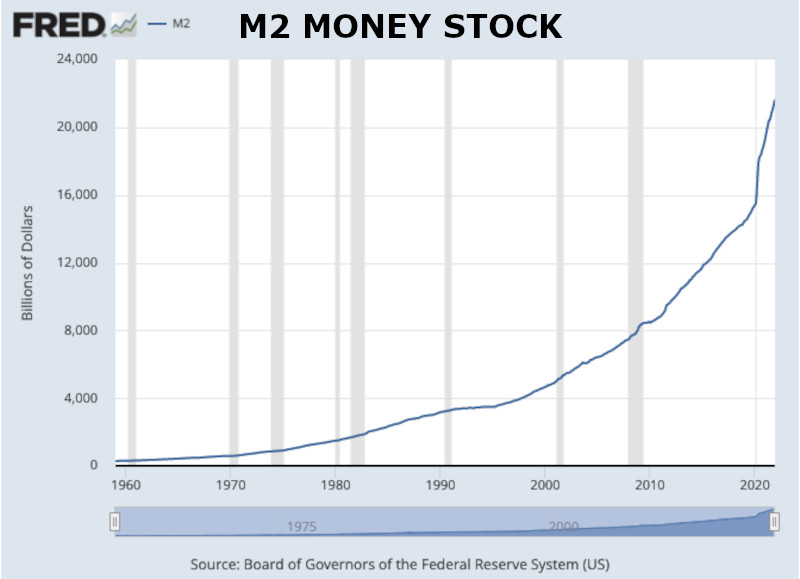 It is very difficult to predict with any certainty where Big Sky Real Estate prices will go in the future, at least in the short term. We like to avoid speculating about real estate prices with clients, preferring to discuss the relative data points.

As this article has demonstrated, there are numerous factors and data points to consider but the two most important come down to the simple concept of Supply and Demand.

Demand for real estate in Big Sky exceeds supply, and there are no indicators that this situation will change in the near future unless there is some large scale negative macro-economic event that wipes out demand from buyers. If we start to see a change in this basic equation we will update this article.

If you have any questions on the information in this article, please do not hesitate to contact us. We are happy to go into more detail on any of the key metrics, and Real Estate Market Reports.