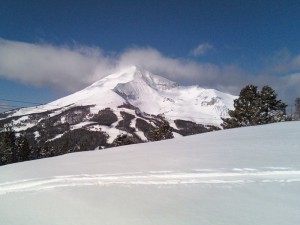 Big Sky is currently booming, but it has undergone numerous changes since its inception in 1973. With the emergence of The Yellowstone Club, Moonlight Basin, and Spanish Peaks sparking controversy, financial instability, and headaches before eventually emerging to be safe investment opportunities.

Beginning with CrossHarbor Capital Partners purchase of the Yellowstone Club in 2009, the area is stabilized, is organized, and is growing again.

In the fall of 1995, Big Sky gained prominence with the installation of the Lone Peak Tram, built to take expert skiers to the summit of Lone Mountain at 11,166 ft (3,403 m) to copious extreme treeless terrain. The Shedhorn double chair was also part of this expansion, installed in 1995 on the lower south face of Lone Mountain. The tram substantially increased Big Sky’s vertical drop to 4,180 ft (1,274 m).

Moonlight Basin Begins. In 1992, Lee Poole bought the land on the north side of Lone Peak adjacent to Big Sky Resort from Blixseth and developed Moonlight Basin with business partners Joe Vujovich and Keith Brown.

CrossHarbor Partners LLC, principal owner of the Yellowstone Club, and Boyne Resorts, Big Sky’s parent company, finalized their purchase to acquire the assets of Moonlight Basin from a subsidiary of Lehman Brothers Holdings Inc. on Oct. 1, 2013